The MIP (membrane interface probe) is a direct push tool used to log the relative concentration of volatile organic compounds (VOCs) with depth in soil. 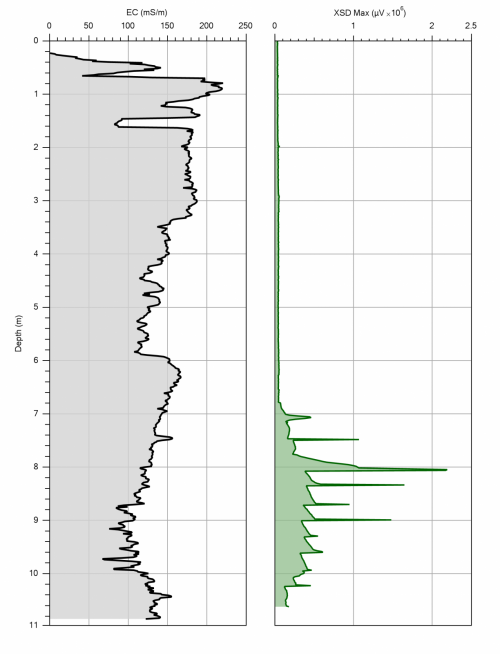 The MIP was developed by Geoprobe Systems® (U.S. Patent No. 5,639,956) and is presently manufactured and sold exclusively by Geoprobe Systems® and its distribution agents. The MIP has been used extensively in the U.S. and Europe for mapping the extent of VOC contamination in the subsurface.

The Membrane Interface Probe (MIP) is a screening tool with semi-quantitative capabilities acting as an interface between volatile contaminates at depth in the soil and gas phase detectors at the surface (Fig. 2). The MIP membrane is semi-permeable and is comprised of a thin film polymer impregnated into a stainless steel screen for support. The membrane is approximately 6.35mm in diamet

er and can be easily replaced. The membrane is placed in a heated block attached to the probe. This block is heated to approximately 100-120 degrees C as the probe is advanced into the soil. Heating the block accelerates membrane diffusion while at the same time minimizing membrane absorption.

Fig. 2: The MIP Principle of Operation. The downhole, permeable membrane serves as an interface to a detector at the surface. Volatiles in the subsurface diffuse across the membrane and partition into a stream of carrier gas where they can be swept to the detector. The membrane is heated so that travel by VOCs across this thin film is almost instantaneous. MIP acquisition software logs detector signal with depth. 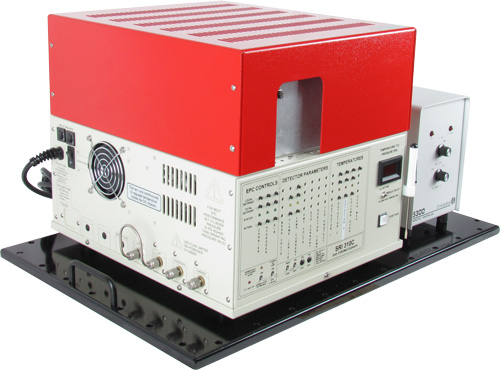 Sweep gas from the MIP membrane is directed to detectors that are part of the MIP instrument system at ground surface (Fig. 3). The standard detectors installed by Geoprobe Systems® include the photoionization detector (PID), the flame ionization detector (FID), and the halogen specific detector (XSD). These detectors are employed in series with each detector providing sensitivity to a particular group or type of contaminant. The XSD is highly specific to halogenated compounds and is the best detector when the MIP is used for logging chlorinated solvent plumes or source areas (TCE, PCE, Carbon Tet, etc.). The PID provides sensitivity to aromatic compounds (BTEX) as well as confirmation of chlorinated ethylene compounds detected by the XSD. The FID is a general detector useful for hydrocarbon detection as well as confirmation of high concentration of all compounds seen on the other two detectors.

In practice, multiple MIP logs are used on a site to find a source area of contaminant, to track the movement of a contaminant plume, to define the mass of contaminant for remediation, or to investigate the efficacy of a remediation treatment. Whatever the purpose of the MIP logging, there are always multiple logs used at any one site.

The MIP log shows the response of the MIP detectors with depth in the soil. The MIP data acquisition system makes this log by taking into account the travel time required for the membrane sweep gas to reach the MIP detectors at ground surface, thus converting the detector time data into MIP response with depth data. An example series of MIP logs from a contaminated site are shown in Fig. 4. The logs in this series, or cross section, show the response of the XSD detector in the MIP system with depth. The contaminant at this site is a mixture of Tetrachloroethylene (PCE) and Trichloroethylene (TCE). This figure shows the main utility of MIP logs in that the position of the contaminant, which varies from location to location, is described by the MIP log. The concentration of the contaminant also varies across the site, which is described by the wide range of responses shown on the MIP logs.

Fig. 4 : A series of MIP logs from a site contaminated with PCE and TCE. The logs shown above are MIP-XSD (halogen specific detector) logs. These logs illustrate the use of MIP in defining the depth at which contaminants are encountered. The concentration represented in each of these logs is also vastly different. The first log has a scale of 105 microvolts (μV) response, the second 106 μV, and the third 107 μV. All three logs are from close proximity on the same site.

In practice, an MIP detector log is seldom used apart from a simultaneous log indicating lithology. This accompanying log can be of electrical conductivity (EC), hydraulic profile (HPT), or CPT parameters. 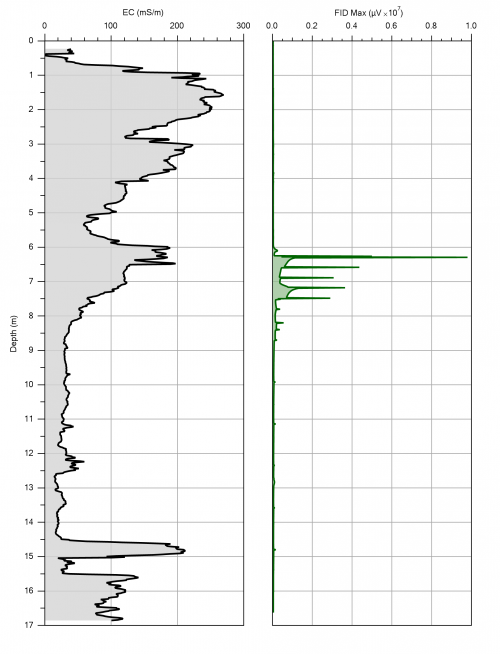 Figure 5 shows an MIP-FID log along with the EC at this location. This example log shows the true power of this combination of logging tools. The contaminated zone (indicated by the MIP log) is located in a fine grain unit (indicated by the elevated response on the EC log).

Fig. 5 : A typical suite of MIP logs including an EC log (left), and MIP-FID (right). This log was obtained on a hydrocarbon contaminated site. The MIP-FID indicates the majority of contaminant mass is at a depth of 6 to 8 meters. The EC log indicates a fine grain soil unit at this depth. 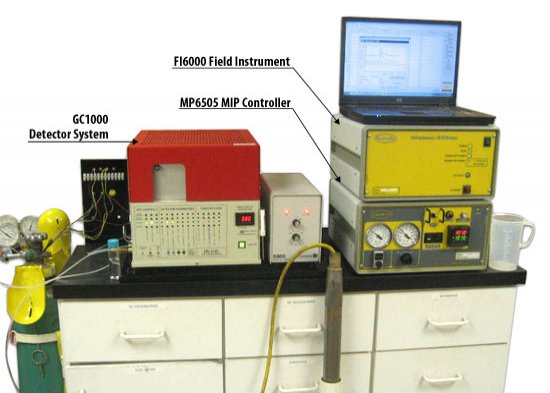 A basic set of MIP instruments is shown in Figure 6. These instruments include the following as labeled in the Figure 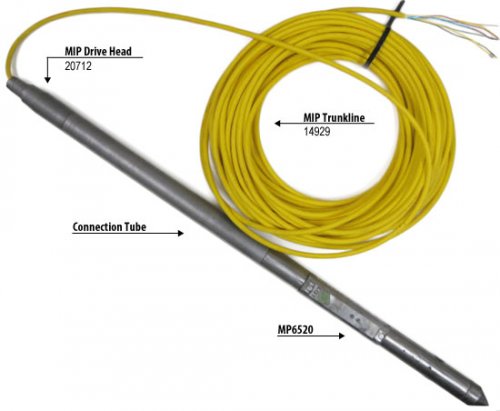 There are several standard configurations of the MIP probe. Tool string diagrams showing part numbers for these various configurations are found on this website http://geoprobe.com/mip-tool-string-diagrams.

Standard probe configurations are shown in the following figures:

Fig. 8 : MP6520 MIP probe. This is the most often used MIP probe. This probe is equipped with an EC dipole at the leading end. The probe is percussion drivable, and can be factory rebuilt after worn out from field use. The membrane and thermocouple are both field replaceable.

Fig. 9 : MH6530 MIHPT probe. This is a combined MIP and HPT probe. This probe offers the site investigator a powerful combination of logging tools; able to detect volatile compounds with the MIP, and estimate soil permeability with the HPT. The probe is also equipped with the standard EC dipole.

The MIP system is available exclusively from Geoprobe Systems® and its authorized distributors. Please contact Geoprobe® Environmental Technologies for a quotation for this equipment. Companies who already operate Geoprobe® EC or HPT systems may already have some of the instrumentation required to operate an MIP system (such as the FI6003 and various probe pushing hardware). All MIP operators must receive a proper training (usually 3 days). This training is designed to teach proper set-up and operation of the MIP system, practice of log Quality Assurance (QA) and Quality Control (QC) procedures, field trouble shooting, and log interpretation. Training is typically designed to include field exercises in MIP logging.